I am most interested in portraying the natural, living state of algae and protozoans. This goal simplifies the microscopy process. So far, specimens were not preserved, stained, or cleaned (for diatoms) with chemicals. Samples after 2001 were examined on the same day of collection in most cases. It seems apparent that notable species deteriorate and die within hours to days of collecting. I attempt to set up the microscope and camera to capture the natural colors of the specimens, which is always challenging to do.

More recently, I have tried experimenting with movement inhibitors, such as methyl cellulose and Detain, in an attempt to capture the small, speedy organisms that I frequently see but have not been able to capture. Maybe in the future I will employ staining and culturing when needed for identification purposes. 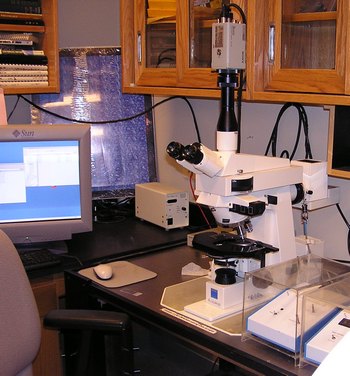 Samples were viewed in Dr. Michael Gretz's laboratory with a Zeiss Axioskop, a differential interference contrast (DIC) compound microscope, equipped with Plan Neofluar objectives (20x and 40x) and an optivar (1.25x, 1.6x, 2.0x, 2.5x). So far, no images were captured with oil immersion.

In 2001 - 2010, the microscope used an attached Sony model DXC-930 three chip video camera to transmit an analog signal. Digital images and video were then captured with graphics cards installed on PCs.

In 2001, digital images of few macro-algae were captured in Dr. Casey Huckins' laboratory with a dissecting microscope, attached camera, and capturing software.